Skip to content
How Congress Politically Marginalizes Communities of Interest

The Blog for Thirty-Thousand.org

The Blog for Thirty-Thousand.org

Because Congress has granted only 435 Representatives to 330 million Americans, many smaller communities are either gerrymandered, or unavoidably subsumed, into enormous congressional districts, effectively disenfranchising their citizens. The only reliable solution is to greatly enlarge our House of Representatives.

A recent New York Times editorial focused on the problem of gerrymandering in order to support their argument for enlarging the House of Representatives. Their editorial, Gerrymander, U.S.A.,1New York Times: Gerrymander, U.S.A. (July 12, 2022)  calls attention to the city of Denton, Texas, describing it as a liberal enclave that will be “absorbed into the 13th District and yoked to the conservative Texas panhandle” (beginning with the 118th Congress as a result of 2020 population census). Supported by photographs, the editorial portrays a stark cultural contrast between Denton and the remaining expanse of the 13th District:

The downtown of Denton, Texas, a city of about 150,000 people and two large universities just north of Dallas, exudes the energy of a fast-growing place with a sizable student population: There’s a vibrant independent music scene, museums and public art exhibits, beer gardens, a surfeit of upscale dining options, a weekly queer variety show. The city is also racially and ethnically diverse: More than 45 percent of residents identify as Latino, Black, Asian or multiracial. There aren’t too many places in Texas where you can encounter Muslim students praying on a busy downtown sidewalk, but Denton is one of them.

Drive about seven hours northwest of Denton’s city center and you hit Texline, a flat, treeless square of a town tucked in the corner of the state on the New Mexico border. Cow pastures and wind turbines seem to stretch to the horizon. Texline’s downtown has a couple of diners, a gas station, a hardware store and not much else; its largely white population is roughly 460 people and shrinking.

The editorial then proceeds to observe that “gerrymanders … silence the voices of millions of Americans, leading people to believe they have little or no power to choose their representatives. This helps increase the influence of the political extremes. It makes bipartisan compromise all but impossible and creates a vicious circle in which the most moderate candidates are the least likely to run or be elected.”

Thirty-Thousand.org fully agrees with the Times’ condemnation of any gerrymandering used to politically marginalize a community. However, Denton does not provide a good example of truly pernicious gerrymandering, as this outcome was largely unavoidable under the circumstances. The reason: Given the size of the House of Representatives, there is no scenario in which Denton could have achieved true representation. The best they could have hoped for, as the editorial puts it, was to be a part of a Republican-majority district that is “more competitive” than the congressional district that will be encompassing Denton. Perhaps so, but as a practical matter, how much better represented would the citizens of Denton actually be in such a district?

The two maps below illustrate Denton’s geopolitical context (at least approximately). The map on the left provides the results of the 2018 U.S. House of Representatives elections2Wikipedia.org: 2018 United States House of Representatives elections in Texas. (per the then existing congressional districts). Note that the city of Denton (identified by a small circle) is located well inside Republican territory.

And the map on the right shows Texas’s planned district boundaries for the 118th Congress3RedistrictingOnline.org: State Redistricting Info Texas (as of this writing). The new 13th district, indicted by the light blue shade in the state’s northwest area, contains 768 thousand people and encompasses an area the size of Ohio. Denton is located in the easternmost extension of that district (in the dark circle). 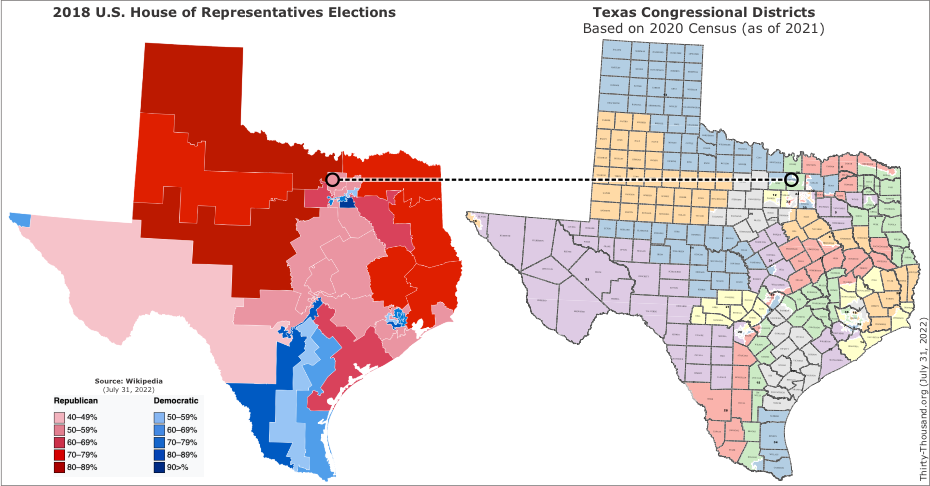 As it turns out, Denton’s problem has more to do with math than political deviousness. Granted, to the extent that Denton could have been melded into a less Republican district, that can be considered gerrymandering. However, the bigger problem is that Denton’s population would comprise only 19% of any Texas congressional district.4Assuming Denton has a population of 150 thousand, that would be approximately 19% of an average Texas congressional district of 768 thousand. So even if it were in a less Republican district, Dentonites would have had little chance of their views being properly represented in Congress.

At the current size of the House of Representatives, the only way for Denton to achieve true representation in Congress would be to creatively gerrymander the city into a solidly Democrat-leaning district (assuming that is even possible). In other words, and ironically, a better solution to Denton’s problem may be more gerrymandering, not less! For example, a super-gerrymandered configuration similar to Texas’s recent 35th district5Wikipedia.org: Texas District 35. might have connected Denton to the Democrat-leaning Dallas area. However, such a solution, like the 35th district, would likely also be condemned for “pack[ing] in as many white Democrats as possible” into a single congressional districts.6DailyKos.com: Join our tour of the worst Republican gerrymanders, with Texas’s 35th District! (January 6, 2017)

This is a real conundrum, as there is no acceptable way to give the citizens of Denton true representation in a House of 435. Even if the district lines were drawn in the most non-gerrymandered way possible, Denton would still be absorbed into a majority-Republican district. Alternatively, it might be able to improve its representation through very creative gerrymandering, but apparently there is no such thing as good gerrymandering.

Unfortunately, Denton’s problem is not unusual. One Texas newspaper refers to the “blue dots in Texas’ red political sea”.7Texas Tribune: Analysis: The blue dots in Texas’ red political sea. (November 11, 2016) And, across our nation, there are many more blue dots in red seas, as well as red dots in blue seas (not to mention dots of other contrasting colors). Altogether, living in those dots are tens of millions of Americans being politically marginalized. And the reality is that even if a committee of saints and angels drew all the congressional district boundaries, innumerable communities of interest would still be subsumed and forgotten therein. And for the six states that have only one congressional district, there is absolutely no possible way for their Dentons to be better represented in the national legislature.

The Solution: A Much Bigger House of Representatives

With respect to this problem, the New York Times’ editorial notes that “there are clear solutions that Congress could adopt tomorrow if it had the will to do so”. The solution recommended by the Times editorial board is to expand the House of Representatives, noting that a “bigger House is necessary to more accurately reflect American politics and to bring the United States back in line with other advanced democracies.” That is certainly true but, unfortunately, the Times advocates an increase in representation so small that the resulting benefits to the citizenry would be imperceptible.

Using Denton as an example, it is easy to understand how significantly enlarging our representation would prevent smaller communities of interest from being effectively disenfranchised. If Congress increased the number of Representatives to the point that the maximum congressional district population were 150 thousand, then we might expect Denton to finally get their own Representative, right? Well, maybe. Or Denton could be divided into several Republican-leaning districts, thereby still being denied the representation they deserve. However, if the maximum population size of the congressional districts were 50,000, a solution that was proposed by the founders, then Denton would inevitably have their own Representatives in the House, as well they should.

The Times also advocates for enormous multimember-districts,8NY Times: A Congress for Every American (Nov 10, 2018) but there is no reason to believe that would be more beneficial to the people than having small single-member congressional districts. Moreover, multimember districts have several serious disadvantages in comparison to small single-member districts. In any case, it should be up to each state to decide how to implement its congressional districts.

The point is, this problem was created by Congress: As a consequence of perpetuating the Regime of 435, which largely represents America’s political ruling class, many communities of interest are effectively disenfranchised by being either deliberately gerrymandered or unavoidably subsumed into massively populated congressional districts. Either way, the only reliable solution to this problem is to significantly increase the total number of Representatives. Congress could easily fix this problem but, in order to preserve the political status quo, the most it will ever do is authorize a token increase (such as that recommended by the NY Times). Therefore we, the people, will have to compel the Congress to do what is necessary, and the only way to do that is via a constitutional amendment.

FiveThirtyEight.com: Texas May Have The Worst Gerrymander In The Country (video). Feb 28,2022.

BACK TO BLOG HOMEPAGE

Established in 2004, Thirty-Thousand.org is a non-partisan and non-profit organization that conducts research on, and educates the public about, the benefits of establishing Congressional districts that are both smaller and equally-sized relative to their populations.

Solely for the sake of brevity, masculine pronouns are used in this website. Unless otherwise suggested by the context, all such pronouns should be construed as gender neutral.

“If a nation expects to be ignorant and free… It expects what never was and never will be.”
-Thomas Jefferson

Thirty-Thousand.org’s “great seal” is derived from the reverse side of the United States Great Seal (shown above on the left) and is intended as an homage to that design which was adopted in 1782. However, the differences to the actual Great Seal may not be readily apparent to many observers until they are compared side by side.

Our version emphasizes the fact that the very first constitutional amendment proposed by congress, Article the first, was intended to ensure that the number of Representatives would forever increase along with the total population. Implementing this proposal will result in citizen equality (ÆQUALITAS CIVILIS) relative to the people’s political power. This equality, as well as the other benefits resulting from smaller electoral districts, will ensure true representation (REPRÆSENTATIO VERA) in the federal House. Hence, ÆQUALITAS CIVILIS = REPRÆSENTATIO VERA.

George Washington – Hero of the Revolution

Not only was George Washington the “indispensable man” relative to the founding of our nation, but he also played a key role in the drama surrounding the size of the House of Representatives.  September 17, 1787, was the final day of the Constitutional Convention in Philadelphia. Two days earlier the convention unanimously agreed to the text of the Constitution and, having since been engrossed on the parchment, it was now ready to be signed by all the delegates. Despite that, an urgent proposal had just been made by one of the those delegates relative to the clause declaring that “the number of Representatives shall not exceed one for every forty thousand…”.  The proposal was that “forty thousand” be reduced to “thirty thousand” in hopes of lessening the objections to the constitution they were proposing to the states. Said motion having been seconded by others present, George Washington rose to address this question. Though he had been the President of the convention, this was the first time he addressed the assembly on a substantive matter.

Our logo is derived from the triangle which hovers over the pyramid in Thirty-Thousand.org’s version of the “great seal”. The triangle symbolizes unity and perfectness, and the equal sign contained therein symbolizes the political equality among the citizens that the Constitution is intended to establish.