“Our Cause is noble. It is the cause of Mankind, and the danger to it is to be apprehended from ourselves.”

George Washington: Hero of the Revolution

George Washington was born at Bridges Creek in Westmoreland County, Virginia, on February 22, 1732. He was the first child of Augustine Washington and his second wife, Mary Ball. His father was a middling planter who owned about 10,000 acres of land. Augustine Washington was also very active in public life, serving as sheriff, church warden, and justice of the peace. George Washington received a basic education, studying math, surveying, and reading. In 1749, at the age of 17, he began working as the county surveyor. This job helped him become familiar with the frontier. With that knowledge and experience Washington was appointed major in the Virginia militia in 1752. 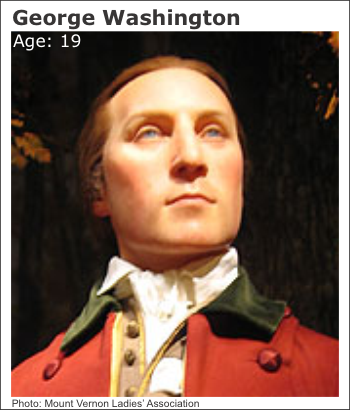 When the French and Indian War ended, Washington resigned his commission and returned to Virginia to concentrate on his family. On January 6, 1759, he married Martha Dandridge Custis, a widow with two children. He was a dedicated stepfather and a skilled farmer. He also became actively involved in politics and was elected as representative from Frederick County to the Virginia House of Burgesses in 1758. He then served as justice of Fairfax county from 1760 to 1774. 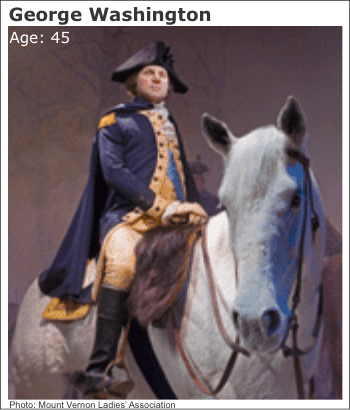 Throughout the American Revolution, from 1775 to 1783, Washington served as de facto chief executive of the United States. He proved to be a gifted leader with good administrative skills and political acumen. When the war was finally won, Washington handed over his powers to Congress at Annapolis, Maryland, and returned home to Mount Vernon to retire.

However, Washington was soon called back to serve his country. The Articles of Confederation proved too weak to hold the new country together, and in 1786 Washington described the situation as “anarchy and confusion.” In an effort to revise the articles, Washington presided over the Constitutional Convention in 1787. In 1789 he was unanimously elected as the first President of the United States. He began his term by stating: “I walk on untrodden ground. There is scarcely any part of my conduct which may not hereafter be drawn into precedent.” 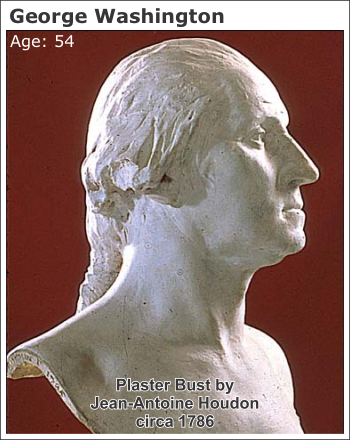 Washington immediately became involved in the creation of the new government. He created the first Cabinet, establishing the departments of State, Treasury, and War. Alexander Hamilton (1755-1804) became the first Secretary of the Treasury, and together with Washington he developed the country’s economic system. On July 4, 1789, Washington signed the first bill passed by Congress. It gave the government the right to tax and was used to pay the debt accumulated by the Revolution and establish American credit at home and abroad. Washington also approved the Federalist financial program and other proposals by Hamilton, including funding the national debt, assuming state debts, establishing a federal bank, creating a coinage system, and establishing an excise tax. In addition to these economic policies, Washington presided over the expansion of the country from 11 to 16 states.

After his first term as president ended in 1792, Washington had plans to retire from political life. His colleagues, however, persuaded him to serve one more term. On February 13, 1793, Washington was once again unanimously elected to the presidency. His second term focused on the young country’s foreign policy. In 1793 Washington announced the Neutrality Proclamation to keep the United States out of all foreign disputes. Relations with France and Britain were tested during Washington’s tenure, but he managed to keep peace. By 1796 Washington had grown tired of the demands of political life and once again decided to retire. This time he was able to have his way and pacify critics who called him a closet monarchist. On September 17, 1796, Washington published his Farewell Address and returned home to Mount Vernon following the next presidential election.

His retirement was brief, as Washington was called again to public service in 1798. The United States was on the verge of war with France and President John Adams (1797-1801) asked Washington to raise an army for defense. Washington answered the call to duty, but the threat quickly subsided due to diplomatic negotiations. Once again he resigned his commission and returned to Mount Vernon. Soon after returning home, Washington, suffering from a serious throat infection, died on December 14, 1799. After George Washington’s death, Congress unanimously agreed to erect a marble monument, called the Washington Monument, in the nation’s capital to pay tribute to the country’s first president.

George Washington before the Battle of Long Island

“The time is now near at hand, which must probably determine whether Americans are to be free men or slaves; whether they are to have any property they can call their own; whether their houses and farms are to be pillaged and destroyed, and themselves consigned to a state of wretchedness from which no human efforts will deliver them.

“The fate of unborn millions will now depend, under God, on the courage and conduct of this army. Our cruel and unrelenting enemy leaves us only the choice of a brave resistance, or the most abject submission. We have, therefore, to resolve to conquer, or to die.

“Our own, our country’s honour call upon us for a vigorous and manly exertion; and if we now shamefully fail, we shall become infamous to the whole world.

“Let us, then rely on the goodness of our cause, and the aid of the Supreme Being, in whose hands victory is, to animate and encourage us to great and noble actions.

“The eyes of all our countrymen are now upon us, and we shall have their blessings and praises, if happily we are the instruments of saving them from the tyranny mediated against them.

“Let us, therefore, animate and encourage each other, and shew the whole world that a free man, contending for liberty on his own ground, is superior to any slavish mercenary on earth.

“Liberty, property, life, and honor are all at stake; upon your courage and conduct rest the hopes of our bleeding and insulted country. Our wives, children, and parents expect safety from us alone, and they have every reason to believe that Heaven will crown with success so just a cause.

“The enemy will endeavor to intimidate by show and appearance; but, remember, they have been repulsed on various occasions by a few brave Americans. Every good soldier will be silent and attentive – wait for orders and reserve his fire until he is sure of doing execution.”

Several sources indicate that this was a speech given by Washington before the battle of Long Island, August 26, 1776. Another source attributes it to General Orders of July 2, 1776.

Established in 2004, Thirty-Thousand.org is a non-partisan and non-profit organization that conducts research on, and educates the public about, the benefits of establishing Congressional districts that are both smaller and equally-sized relative to their populations.

Solely for the sake of brevity, masculine pronouns are used in this website. Unless otherwise suggested by the context, all such pronouns should be construed as gender neutral.

“If a nation expects to be ignorant and free… It expects what never was and never will be.”
-Thomas Jefferson

Thirty-Thousand.org’s “great seal” is derived from the reverse side of the United States Great Seal (shown above on the left) and is intended as an homage to that design which was adopted in 1782. However, the differences to the actual Great Seal may not be readily apparent to many observers until they are compared side by side.

Our version emphasizes the fact that the very first constitutional amendment proposed by congress, Article the first, was intended to ensure that the number of Representatives would forever increase along with the total population. Implementing this proposal will result in citizen equality (ÆQUALITAS CIVILIS) relative to the people’s political power. This equality, as well as the other benefits resulting from smaller electoral districts, will ensure true representation (REPRÆSENTATIO VERA) in the federal House. Hence, ÆQUALITAS CIVILIS = REPRÆSENTATIO VERA.

George Washington – Hero of the Revolution

Not only was George Washington the “indispensable man” relative to the founding of our nation, but he also played a key role in the drama surrounding the size of the House of Representatives.  September 17, 1787, was the final day of the Constitutional Convention in Philadelphia. Two days earlier the convention unanimously agreed to the text of the Constitution and, having since been engrossed on the parchment, it was now ready to be signed by all the delegates. Despite that, an urgent proposal had just been made by one of the those delegates relative to the clause declaring that “the number of Representatives shall not exceed one for every forty thousand…”.  The proposal was that “forty thousand” be reduced to “thirty thousand” in hopes of lessening the objections to the constitution they were proposing to the states. Said motion having been seconded by others present, George Washington rose to address this question. Though he had been the President of the convention, this was the first time he addressed the assembly on a substantive matter.

Our logo is derived from the triangle which hovers over the pyramid in Thirty-Thousand.org’s version of the “great seal”. The triangle symbolizes unity and perfectness, and the equal sign contained therein symbolizes the political equality among the citizens that the Constitution is intended to establish.